Across the world, there are many small producers of top quality authentic food products that demonstrate high demand potential. It is often the case that these producers do not have access to international markets and that they also lack the necessary resources needed to market and sell their products in a sustainable manner.

Equitable Gourmet was established to identify such small and medium-sized producers and to market their products in developed markets.

We believe in our producers and in the quality of our products. We are dedicated to obtaining the maximum amount of support for them from aid agencies and non-governmental organisations so that they are able to respond to the growing demand for their products, and share in our company’s success. 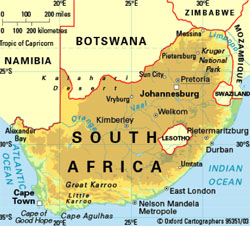 The Republic of South Africa is a country located at the southern tip of Africa. Even though the country has the seventh highest per capita income in Africa, it suffers from large income gaps and a dual economy, marking it as a developing country with one of the highest rates of income inequality in the world.

Equitable Gourmet Ltd has worked withproducers from South Africa, and hopes with time, to be able to expand its supplier base and Development Partnerships in this beautiful and expansive country.

Totally Wild (PTY) Ltd – Totally Wild is a young small company located near Cape Town, the 2nd largest city in South Africa, located on the horn of Africa. Established in 2007 the company specializes in the development of a range of high-end food and beverage products, the key ingredient of which is ALOE FEROX. The raw aloe comes from Calitzdorp, an area in the Western Cape province where the aloe ferox plants grow naturally and plentifully in the wild over large stretches of unused land, and where a small pre-processing facility has been set up on one of the farms. This is where the harvested aloe leaves are brought to be peeled, washed and packed, generating much needed income for the local community.

Afriplex (PTY) Ltd – Afriplex is a key supplier of products and services in the nutritional and health food sectors. The company’s current involvement in community projects is proof of its commitment to the promotion and propagation of the indigenous species of Africa, and the uplifting of local communities.

THe BLCF Fynbos Project, financed by the British Government’s Department for International Development was started in 2003. It involves the cultivation and commercialization of Fynbos species indigenous to South Africa by previously disadvantaged communities. Long-term agreements with multinational companies are negotiated to ensure a stable market for products.

Afriplex is the sole sponsor for YLAC (Youth League Against Crime), a local rugby team from the rural town of Van Rhynsdrop. The team comprises of community members who play an active role in the battle against crime in the region.